14
May
Posted by bycadmin
Category:
No Comments 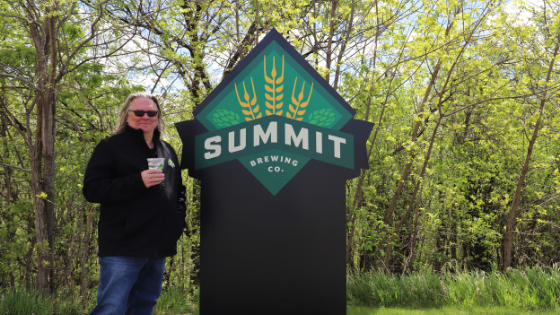 Summit Brewing Company was established in 1986 in St. Paul, Minnesota. Their beautiful facility still stands tall beside the Mississippi River, providing classic beers with consistently refreshing taste. At College City Beverage, we’re always honored to distribute local products across Southern Minnesota. We enjoy learning about their unique journeys, and that’s why we recently sat down with Summit’s Founder and President, Mark Stutrud. He told us about the history of Summit, their production process, and why they brew what they brew. Keep reading to learn more about this Twin Cities landmark.

Give us your elevator speech about Summit Brewing Company in a nutshell.
I started Summit Brewing Company in 1986 because I really wanted to re-incorporate true beer culture within the beer-drinking population of the United States. Prohibition really interrupted an educational process of growing up and learning about different styles of beer — celebratory beers, seasonal beers, and types of beers that were not lost through European and English culture. That’s what I really wanted to return to the Midwest. It’s funny now, after 35 years, every once and awhile new brewers will look at me, and they’ll say: “Jeez Summit — you’re really consistent, and you’re classical, and you’re traditional.” And I’ll say: “Thank you for noticing, because that’s the foundation of all that we do and who we are.”

What is the differentiating factor of Summit Brewing Company?
A huge asset of Summit Brewing Company is that we are known for deep quality. Back in 1986 when I started the brewery, the beer landscape was homogenous. You would go into a restaurant or a bar and all of the beers that were on tap literally represented one style, which would be the Great American Lager. There may have been an import thrown in every once and awhile, but it was extremely uniform. When we were starting up, I had spent four years prior planning and preparing this business, including going to brewing school and having two master brewers as mentors, consultants, and guides. It was extremely important to me that we were focused on quality. It would be one thing for someone to say: “Eh, I don’t like that Summit Extra Pale Ale. It’s too hoppy or too whatever.” But for anybody to say that the quality is sub-standard, that would be our biggest criticism. We would not have a position to compete! Back in 1986 we were competing head-on with national and international brewers. So, we had to be really on top of our game from the technical point of view.

What is unique about Summit Brewing Company’s varieties?
We’ve got a wide portfolio of different flavor profiles. At the same time, they are all rooted in classical and traditional styles. If you talk to a brewer: water is the foundation, hops are like a spice, and yeast provides character. But malt produced from barely is the soul of beer. We started with Extra Pale Ale (our first beer in 1986), and after being in production for just three months, we introduced Great Northern Porter. It’s unbelievable that, at that time, we were one of five breweries worldwide that made a Porter. Even though we started with ales, we’re known for Lager and Pilsner production. When I have our Keller Pils, I can close my eyes and I feel like I’m back visiting Bavaria.

The other thing about our organization is that we have a lot of technical depth. Damian McConn, Head Brewer, is a native Irishman. He has his Master’s Degree in Brewing and Distilling from Heriot-Watt University in Edenborough, Scotland. Damian has been with me for 18 years, so we have a well-trained staff including very educated and experienced lab personnel. We take things seriously. We don’t take ourselves very seriously, but we take our beer very seriously.

What are some of Summit Brewing Company’s values as a brand?
We have a selfish philosophy that we will not produce and sell a beer that we do not enjoy ourselves. We always have a very open approach to the styles of beer that we produce. Typically, it takes pretty close to two years from designing a beer to actually getting it to the point where we release it to our customers. A big value [of Summit Brewing Company] is that we really take a deep dive into making sure that the beer we make is exactly what we’d want [to drink]. Because of that, we have become a trustworthy and reliable brand. There is a very high degree of confidence in someone who decides to buy a Summit.